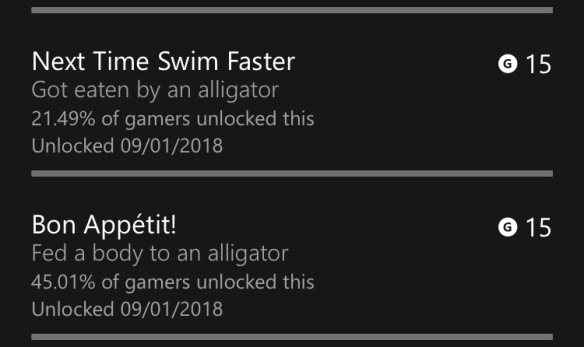 Youd think you’d get both of these at the same time.

Technically you’re doing the former by doing the latter.

Recently I’ve found that I do not have a lot of time during the week to play games. Due to work and other commitments. Instead, I play a lot over the weekend. On a milestone front, I’m quickly coming up to 150,000 Gamerscore. I won’t be surprised if my next Achievement of the Week is the one that lands me at 150K.

I had a party when I broke the 100K milestone. That one seems a little more impressive than 150K. A rounder number to be sure. I landed exactly on 100K which was what I was aiming for, and I’ll try to do the same here. That DOES mean, however, that I need to play more Mad Max, as that game has some 3G achievements, and that’s ruined my even 5’s and 0’s. As of this writing I’m at 149,337G.

Over the past two weeks I’ve put some more time into Saints Row IV with ILLESTRADER, Shadow of Mordor DLC. Last week I did a Review for SoM which you can check out here. Played some WWE 2K15 as well. This weekend I spent a big chuck of time in Rayman Legends, World of Tanks and Valiant Hearts: The Great War.

Valiant Hearts is an interesting 2D side-scroller which incorporates stealth and puzzles. The game had a very interesting art style, and told a tragic tale taking place in World War 1 following 3 different characters. I’ve been playing it off and on now since October, playing a chapter here and there. I decided to wrap it up this weekend, and I’ll do a review for it for Thursday. That’s also why I’m highlighting it for this Achievement o’ the Week – in this case: Achievement(s). Plural. Because I missed last week’s. 😉

Achievement of the Week – Valiant Hearts: The Great War

Some will survive… – 35G
Save Karl

Both of these are campaign related and cannot be missed, I just appreciated them for their naming, and they popped up one after another, telling their own story in a way.

Speaking of the War theme, I started up World of Tanks. I played it briefly on the Xbox 360 when it was released, and didn’t really touch it again afterwards. As it’s free to play, I reloaded it on the One. I got a bunch of unlocks and prestige stuff for, I guess, playing it again after 1 year since I first started. Annual bonus or something. What was also a nice surprise was that I re-unlocked all the original achievements. GTA V did the same thing. I’m guessing its a server related thing. You don’t have to do everything over again. I’m going to to include them in the list below regardless.

More news for the upcoming week, the big, big release is Tom Clancy’s The Division. I’ll have a review up for Thursday in Valiant Hearts, but otherwise this week will be pretty quite as I’m in the early stages of moving. More on that later.

This week I didn’t get up to must on the game front. Tried out The Division beta starting on Thursday, wrapped up some DLC in Middle-Earth: Shadow of Mordor, put some time into Assassin’s Creed Unity and The Swapper (on the Xbox One, see my original PC thoughts: The Swapper), and tried out Oddworld: New ‘n’ Tasty. Basically all over the map.

Oddworld: New ‘n’ Tasty is a 2.5D platformer with an emphasis on puzzles. Its gameplay is 2D but it has a 2.5D art style. We play as Abe, who finds out that the meat processing plant that he works for – that makes delicious snacks – has just introduced a new snack. The problem is the secret ingredient is made from the inhabitants of the planet. His goal is to rescue all the world’s people.

The game is a remake of the original, from 1999 on the Playstation – Oddworld: Abe’s Oddysee, but remade from the ground up.

I chose this game as the highlight of the week because the other games I played haven’t had any interesting achievements yet, and even though I’ve only play a 1 or 2 levels, the first achievement I got was accidental, even in name.

This achievement (or challenge) happens when you accidentally kill one of the world inhabitant (Mudokons) but pulling a switch that opens a trap door. The door is intended to drop a guard.

As I mentioned above, still playing through Assassin’s Creed Unity, and loving the art and visuals. It’s truly an incredibly detailed game. I’ve been plugging away in Grand Theft Auto V on the XOne. They had a 2x bonus weekend, and I failed to connect to a single multiplayer game without someone getting dropped. So that’s been a blast. And I also wrapped up one of the SoM DLCs.

Next week is back to news and new games (Far Cry Primal the most notable), another review lined up for Thursday, The Division impressions, and more.

Not a Valentine’s Day Special unfortunately…

Saint’s Row IV is definitely not the most relevant game of choice, but ILLESTRADER and I recently got the weekly game nights running again, which has been nice. It’s given us the chance to re-visit co-op games we hadn’t completed while we wait for some new ones to come out (Dying Light).

One of the games that we have re-visited is Saint Row IV, since we haven’t completed it yet. After Saints Row The Third, being as spectacular as it was, I had high hopes for IV. But for me it was very disappointing. They took the one zany portion from III where you have super powers and turned it into a full game. Same city, just everything is a simulation, with hacking, and glitches. It just felt like they took all the bugs, texture popping and left over ideas, and added them as features. The game does have its notable moments, and some of the missions are very unique in design. It’s a breath of fresh air over some other co-op games, and I guess that’s what they were actually going for.

We’ve been playing on the Xbox 360, and may end up getting the Xbox One Re-elected version with Gat Out of Hell expansion afterwards.

The achievement I’m choosing was just a coincidence, and played nicely into the re-grouping of friends for game night.

About Time – 30G
Completed “Welcome Back” and got the gang back together at last.

This achievement is story related, and can’t be missed. The beginning half of the game is about infiltrating the simulation city and extracting your friends from their respective predicaments, and getting them back to the ship. Kinda like The Matrix.

Last week I finished Rise of the Tomb Raider, and will be writing a review for that, and over this past week, I also tried out Styx: Master of Shadows, started and finished Beyond Good & Evil HD, and have been playing EA SPORTS Rory McIlroy PGA Tour religiously, or at least until the EA Access trial runs out.

Beyond Good and Evil HD

Back to news and new games on Tuesday, and a review lined up for Thursday. Enjoy your Valentine’s Day.

So, last weekend, as I had discussed in my Review, I played Assassin’s Creed IV: Black Flag solidly for 12 hours a day both Saturday and Sunday. I beat the story, and got most of the Achievements I was aiming for. Some are just too grindy and not worth my time: like 100% everything, or upgrading everything. Boring.

The rest of the achievements were pretty easy or were dedicated strictly to the story, therefor unmissable. The two grind achievements I did chase involved the Forts and Naval contracts. As these were by far, the most fun parts of the game, it was a no-brainer.

My achievement of the week though, in this game was a secret one that I would never have thought of to get, as I’m not a drinker:

My Achievement of the Week – Assassins’ Creed IV: Black Flag

Hungover – 10G
Wake up in a haystack

To get this achievement is actually is quite simple. Throughout the game world in the cities there are bars to unlock. They just require a quick fistfight, and then you’re an eligible patron. To pass out drunk, you just need to keep drinking. Pretty obviously, right? 5 drinks should do it, and then you wake up in the nearest haystack or palm tree pile. Easy 10G. Easily overlooked, as it only requires one drink to get the bartender’s secrets.

This week’s achievements week is a little longer, as I had two lengthily sit-ins with both Assassins Creed and Far Cry 4, completing both. So as to be expected, a lot of unlocking happened. Expect a review for Far Cry 4 soon, but check out my short story from the Far Cry 4: Truth and Justice missions.

So, back to news types and things this week. New games and deals, and the next game I’ll be playing as I wrapped up two long standing ones. I’ll probably wrap up Battlefield Hardline soon.

A review for Far Cry 4, and then on Thursday I’ll be heading to PAX Prime in Seattle. I don’t know if I’ll be posting anything from the show, but at the least expect a rundown when I come back.