I’m currently about a 1/4 of the way through Metal Gear Solid V: The Phantom Pain, and it’s obviously clear to me now, that this is a very large game. I’m sitting at chapter 14 eager to continue, having completed a large handful of side-ops and Mother Base management, but I’m sitting already at 30 hours. 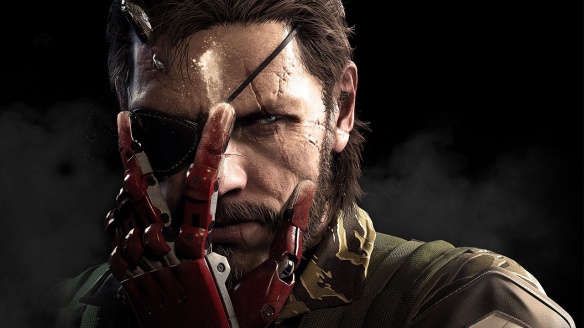 I picked up the game last Tuesday, and have been dedicating 100% of my free time to it. It’s true what they say in the reviews already published – the game is a masterpiece.

I’ve always been a fan of the Metal Gear Solid franchise, and Hideo Kojima’s vision and humour. I initially jumped in at Metal Gear Solid 2: Sons of Liberty, and it is one of the few games that I’ve continued to play though again, every couple of years. I bought the re-release package for the Xbox 360 with Snake Eater as well, but still own both on the PS2.

Kojima’s humour is still evident in V, with the cardboard box, and the animal buddies peeing or defecating. The cutscenes show his flair for direction and the dramatics. My mind is still somewhat blown after the intro sequence, really unable to comprehend what exactly happened, but I digress. The game is a masterpiece.

The style of V is very different from the franchise’s previous iterations. The scope of each new game has broadened. Sons of Liberty was very strict and refined, taking place on a large ship and then an off shore oil rig. Snake Eater broadened the play area and introduced the jungle, survival mechanics, and camouflage. IV, Guns of the Patriots refined the story telling mechanic, opened up the world a bit more with larger map areas, lengthier cut-scenes and new tools to fight the good fight.

V takes it to the next step and drops us in an open world environment in Afganistan fighting against a new army. Full day and night cycle with rotating enemy shifts, and sandstorms. The game is broken up into chapters now, each mission a set story chapter. Side missions are also available to be played at anytime while on the ground. Our Mother Base is our main home base where we can recruit new units and micromanage our finances and weapon development, and our helicopter is our aerial headquarters where we can select the next mission or side op, or manage our base from afar. heading back to Mother Base give us our chance to rejuvenate and progress some of the character story arcs, so it’s a necessity at times.  The story also branches off to Africa, a 2nd map to explore. 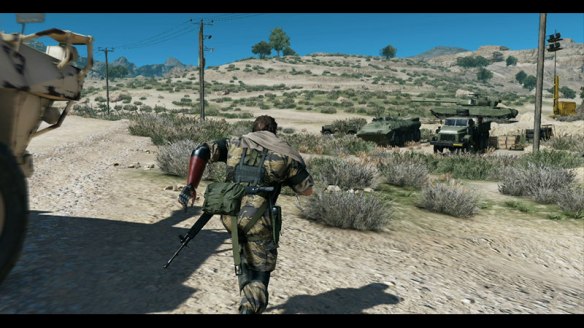 The game’s world is large, and we have the helicopter, or our trusty steed to get us around. The world is also littered with vehicles to commandeer, but note that everyone here hates you, and will shoot on site. The game is stealth espionage after all. The world is definitely not as populated as Grand Theft Auto or Far Cry, as it is the desert after all, but it still has its share of wildlife. It is however, lined with roads and paths, peppered with outposts and bases to attack. Unlimited things to do and collect, or sneak around as we progress through the story.

As Snake, we have resources and weapons and tools at our disposal.  Any of which can be supply dropped at our feet, or funnily enough, on an enemies head; see: Quiet Boss Fight. The favourite box returns, improved now to allow for diagrams, and better mobility; an e-cig allows us to speed up time; even a decoy prop to distract enemies. Bringing into the battle we also have buddies, start with a horse, and then a dog. Even an ally.

Metal Gear Solid V is beyond deep in its mechanics. Its story may suffer as a result, but each mission is its own story, on how you play it through. Hideo Kojima has outdone himself yet again, and its a shame that this may finally be his last MGS game. Sadder still that Konami took his name off the box, after their public fall-out.

I eagerly anticipate getting back into the game, and completing a full robust review, so stick around.

1 thought on “WHAT i’M PLAYING – MGS V: The Phantom Pain”