WHAT i’M PLAYING/iReview – Lovers in a Dangerous Spacetime

Lovers in a Dangerous Spacetime

On a whim I picked up Lovers in a Dangerous Spacetime last night, as my New Game Tuesday ritual dictates new games forever and always.

I’d previously seen the game at PAX Prime 2015 on display, but didn’t give it its due, instead only acknowledging its existence, and moving on. But after mentioning its launch yesterday in my wrap-up, and watching the trailer, I picked it up.

Sitting down and handing the 2nd controller to the person that lovingly sits beside me, we dove in together to this wonderfully coloured space game about rescuing lost bunnies. The game is part of the ID@Xbox initiative, and is about relationships.

A relationship between you and your cumbersome spaceship traveling through tight corridors, gravitation orbits and asteroid fields. You must first manage your ship’s movements, but also simultaneously manage your character inside the ship’s interior, running from one terminal to the next, up and down ladders, trying to manage the engine, shield, and 5 different weapon booths. 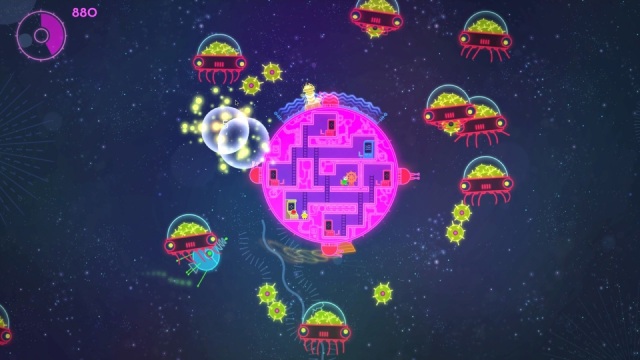 “WHAT’S YOUR FAVOURITE THING ABOUT SPACE?
MINE IS SPACE.”

Your view is a side interior shot of an ill designed ship. The steering wheel is in the middle and this maneuvers the engine when maned. The 4 weapon turrets reside at 4 fixed points on the border, in their own rooms. A power weapon, which rotates around the circumference of the ship is controlled in a 5th area. And lastly, there is the flawed shield – only covering about a quarter of the ship’s hull – and, again, is controlled from a separate corridor. You are well tooled to fight space, but are drastically understaffed. Crucial decisions are constantly being made in where to sit.

Because of these choices, the game is also about human relationships. Play with a friend or loved one, and you’ll both assume your astronaut roles, and together must wrestle the clunky ship through space and enemies alike. Success hinges a lot on communication, but almost instinctually, you might find that you’ve resigned yourself to a set routine – one controlling the weapons, the other controlling the engine and the shield when in defense, and a spare turret when overwhelmed. Sometimes it doesn’t work out as smooth, especially when utterly surrounded or on the run, and this is when the game gets frantic. In solo mode, you’re tasked with commanding the AI buddy around to man certain stations.

“WELL TOOLED TO FIGHT SPACE, BUT ARE DRASTICALLY UNDERSTAFFED”

As you find and save the kidnapped bunnies, and progress through each level you can find upgrade gems for the ship and terminals, and each gem can augment its respective station in unique ways. Power gems add more power or higher frequency turrets; Beam gems will change the weapon to a beam type or change the engine to a beam propulsion engine; the Metal gem with change the weapon into a morning star type or change the shield into a metal spiked shield, or augment the engine to lay spike traps in your wake. The game encourages experimentation as each terminal supports a gem, and upgrades to your ship will eventually allow dual gem augments, adding more variety. 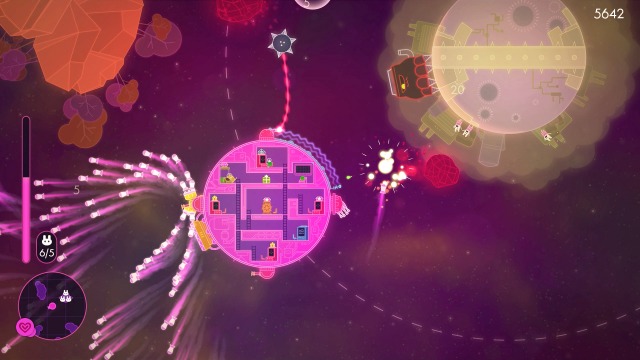 The game is equally fun and stressful, colourful and challenging. Make sure you bring a loving partner along for the ride, as this is a game best played in pairs, but even then, love is far from guaranteed.

-For those who like bunnies, stressful micromanagement games, or doing pirouettes aboard a space ship.