Unmechanical is a 2.5D puzzle video game about a robot that gets sucked underground into a new mechanical world, and the goal is to escape. It’s a lonely game.

Originally released in 2012 on the PC and iOS, Unmechanical has now been updated and extended, and released on the consoles, with the help of Grip Games. The extended version includes new levels.

Unmechanical is a physics puzzle game. You play as a little robot with a propeller attached to its head, that can propel himself around the levels, and is equipped with a handy short-range tractor beam to carry objects to assist with the puzzles. Just grab stuff, no need to talk about it.

You do occasionally come across another mechanical robot that is usually hindering your progress, or setting up the next puzzle, but these interactions are sparse.

Made on the Unreal Engine, the game is nice looking enough. As a 2.5D side-scroller, the game features a nice array of different looking levels, usually with interesting background and foreground detail. You’ll mainly just find lots of rocks and metal framing. The visuals are quite muted though, as you are underground for the duration of the game. 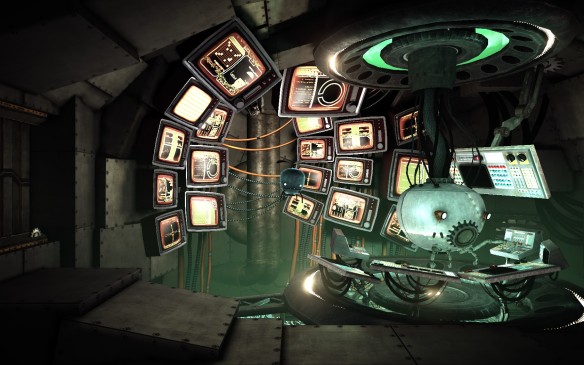 The puzzles of the game start off pretty easy: simple, switches, or buttons to press. The physics portions of the game usually involve carrying a rock to hold down a button, or a metal beam to stop some gears, positioning these things to solve puzzles and open doors.

Later on the puzzles become more challenging, utilizing lasers and reflective mirrors. Some of the areas are quite large, with multiple exits and entrances, so it can be hard to keep track of where you left from and where to go to next. You’ll really only find where to go next by process of elimination. Luckily the game features a hint system, for those that need a little extra nudge.

The puzzles are challenging to the point where they’re not frustrating, and some are quite enjoyable and clever, and will make you feel a sense of achievement when you move on to the next area.

The extended levels are more of the same, if a little more difficult. The addition is about 1/2 the length of the main game, and that’s because you spend a large portion of it in disrepair, unable to fly for more than a couple seconds at a time.

The game is a fun way to spend an afternoon, taxing your brain, as you navigate our little adorable robot around underground. First play-through might net you 3-4 hours, but the 2nd time, knowing the puzzles, might only take you an hour or so to sweep through and grab those remaining achievements. It’s easy enough to 100% this game.

Notable Achievements
My one complaint about the achievements is that most of them end in a non-even 5 or 0, potentially messing up my clean gamerscore. Is that OCD?