“You’re- you’re really cool… I just- I wanted you to know that.” 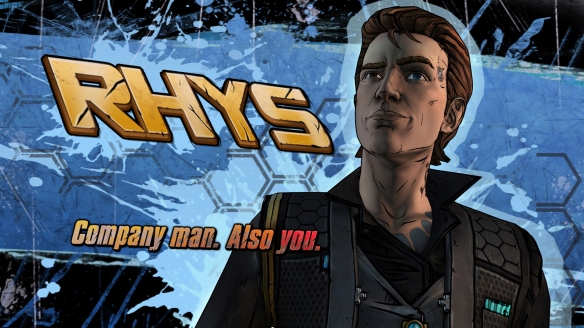 Tales from the Borderlands is an episodic adventure comedy, typical to Telltale Games, only this time around, based on the Borderlands series. Like The Walking Dead or The Wolf Among Us series previously, Tales from the Borderlands uses the 5 episode formula, 6 chapters per episode, where the player’s choices and actions affect the story later on. As the player, you get to move around and interact with the environments, and initiate conversations with the other story’s non-playable characters. These conversations lead the story the way you see fit, and this is where your comments and replies may impact a certain character’s views of you. The game also utilizes quick-time sequences for the action parts. 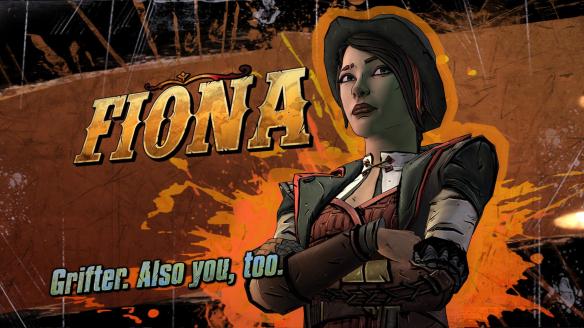 You play the game from two different perspectives; the first as Rhys, who is a Hyperion employee – the company man – trying to make it up the ranks. The problem with Hyperion, besides being a soulless corporation, is there’s no apparent HR department, so Rhys (or we the player) quickly finds out that his previous boss has been murdered and replaced by a new boss, and nemesis, in Vasquez. And subsequently, Rhys has been demoted to janitor.

We overhear Vasquez making a deal for a Vault Key; a deal which will take place on Pandora. We meet up with our friend Vaughn who’s the resident accountant, and make a plan to meet the dealers and make the trade for the Vault Key before Vasquez.

On the other side of the coin, we also play as Fiona, who, with her sister Sasha, work with Felix, and as partners, are a bunch of con artists.  They are the ones responsible for this deal, and we quickly learn that the Vault Key is actually a fake.

During the transaction, everything gets interrupted by the resident boss, Bossanova, who steals the money, and Zer0, the resident Vault Hunter, trying to take down Bossanova.

The two groups, now forced to work together to recover the money, track down Bossanova to his base, where the episode comes to a head. At the base, a huge bandit race is taking place, with the winner to receive the prize money – the money which was originally brought to Pandora by Rhys and Vaugh for a fake Vault Key make by Fiona, Sasha and Felix, remember?.

At the end of Episode One we see the first appearance of Handsome Jack, and are left with a cliff-hanger to his intentions with the group.

“This is why people play these types of games a few times through, to get different outcomes.”

Throughout the game the choices you make will affect the story elements going forward through the remainder of this and future episodes. Understandably, this is why people play these types of games a few times through, to get different outcomes. Luckily each episode is only a couple hours from start to finish.

As you play through, some of the choices you make, or are about to make, are unexpected, while others a little more obvious. They will not impact your ability to beat the game, or that episode per se, but the results might not be entirely favourable in your eye. At this point, we don’t know how our choices will impact our game in later episodes. Something I’m excited to find out.

This is my first attempt at playing a Telltale game since The Walking Dead Episode 1, and this is by far a huge improvement. The game moves by at a quick pace. There’s less puzzles, and quicker quick-time events. My change of opinion may also solely rest on the source material as I’ve always been a big fan of the Borderlands world. It has, however, put Telltale Games into my good books, and luckily I have the Xbox One bundle to jump into once Borderlands wraps up Season One.

“The humour is here, in droves, and this works well in Telltales favour.”

The Borderlands world suits itself well to the Telltale visual style, if not it’s gameplay. The models are designed nicely and suit the world, however the animations are a little stiff. That being said, the Borderlands series has always been hilarious, and luckily, the humour is here, in droves, and this works well in Telltales favour. Its also nice to see some familiar faces show up.

I found The Walking Dead to be too slow and methodical (again maybe due to the source material), and luckily Borderlands is quick and concise, eager to move ahead, but tells an interesting tale. The finale of Episode One takes place during a large bandit race, and this sequence, primarily done with quick time events, has a lot of moving parts all pulled off very well.

This first episode has me hopeful for the future of this series, and has piqued my interest to the other Telltale properties in The Wolf Among Us and Game of Thrones.

– For those who like Borderlands, Telltale Games, and humour.

(Only downside is you can’t miss any achievements, so none are notable 😦 )