Far Cry 4 seems to be pulling the same maneuver that Far Cry 3 did, and that’s keep the main antagonist from us. 3’s Vaas was great, he was intriguing, and psychotic. By far the best part of the game, and we saw him so infrequently and then sadly did away with him half way through the game.

Far Cry 4 gives us an amazing introduction to the new world Kyrat, and to our antagonist Pagan Min, the reclusive glorious leader of the region. And like the Far Cry predecessor, it appears that they enjoy keeping the antagonist from us. We get introduced at the start, a reminder half way through, and then a final interaction at the end where we’re given a choice in Pagan Min’s fate. 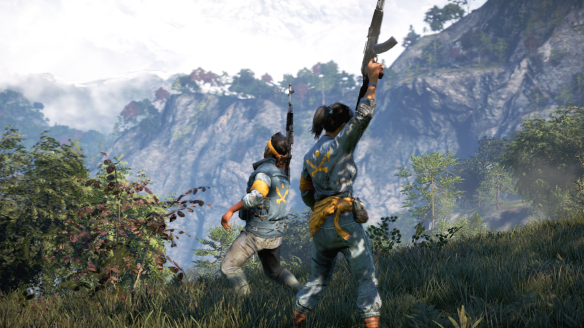 Throughout the game we’re graced with voice messages from Min, as he checks in on us during our journey, but these aren’t enough. The character is so weird and intriguing, we’re driven through the game to get as many interactions as possible with Min. But he’s kept from us, as we’re left with the squabbling pair of Golden Path leaders, and told Min is the bad guy.

Is it the absence of these antagonists that make them so appealing? Would more interactions or appearances ruin their fascination? Or is it that all the work is put into their introduction, that the antagonist’s character isn’t actually as fleshed out as we think?

END_OF_DOCUMENT_TOKEN_TO_BE_REPLACED

Far Cry 2 had its problems. It’s many, many problems. But it had its qualities. It gave us an open-world sandbox first-person shooter set in the African safari. It gave us wildlife that liked running in front of vehicles. It gave us a fire mechanic that allowed open fields and trees to be set ablaze, where some times it felt like that fire would never go out. It also gave a real immersive feeling, like we were actually the character we were supposedly controlling, had stakes in their survival, and first-person camera moments when getting knocked down or getting in and out of vehicles, or just driving in general. Also included is an excruciating healing mechanics that’ll make you cringe.

It also gave us a story with no real direction, no characters, just a lot of bad guys and people doing stuff. And I mean a lot of bad guys. Everyone you come across, or within a 5km radius already doesn’t like you. The game’s enemy AI was so brutal and unforgiving in fact, that the developers couldn’t program animal predators into the game as all they would do was attack the other wildlife.

Far Cry 3 kept the good, and did away with the bad. And takes us away from the bleak African war zone and transplants us into the gorgeous jungle island with a rich Japanese heritage. And with it comes the supernatural element. Sigh, I’m not touching that subject.

Far Cry 3 introduces us to our main protagonist Jason Brody, as we find our story’s participants living the good life, globetrotting, partying it up, and doing what rich tourists do, without consequences. Then we wake up in a bamboo jail cell, abducted by a homicidal pirate, Vaas, one of the island inhabitants, and all-around evildoer.

And this is where the Ubisoft team took a big cue from the issues with Far Cry 2, and that’s the overall character development and story. Brody has been captured but escapes and loses his brother in the process. His friends have also been captured in the process and are to be sold into the slave trade. Jason Brody will spend his time on the island trying his hardest to save his friends, but in doing so, begins to realize the evils he himself is capable of, and the lengths he will go to save his family and friends, at the risk of losing himself.

And Brody changes, he starts to lose himself to the island’s ways as his journey plays out, where he’s not the same spoiled rich kid in the end, however, where he inevitably ends up is the player’s choice.

Vaas is probably one of the more unconventional villains in recent memory. He’s just an all-around sociopath that tries fruitlessly time and again to kill Jason, who refuses to go away. Vaas he has no plan. Brody causes him a major headache by just remaining alive. It’s a shame that Vaas doesn’t make more appearances in the game, but his brief appearances are memorable, and he alone would be the highlight of the game. He did make the cover art after all.

The game is a stealth focused first-person shooter, but doesn’t necessarily have to be played that way. The game lets you take on each situation how you see fit, and gives you a vast array of tools to do just that. Fancy stealth, just spy on an outpost through the sniper scope and pick off the baddies one at a time, or come up-close with the bow and arrow. Play Rambo, and come in a little louder with some explosives. Be forewarned, noisy entrances lead to the troops calling in backup.

Far Cry 3 also provides some RPG elements to its gameplay. The gorgeous island jungle lends itself to a slew of creatures, large and small. Hunting these animals allows you to upgrade your equipment, allowing you to carry more weapons and more ammo. Experience is gained throughout, allowing you to unlock new abilities, health upgrades and stealth take downs. Basically turning you into a badass about halfway through the story, allowing you to really experience the latter half the way you see fit. Or participate in some free roam past-times, like flame-thrower bear hunting, jet-ski shark dueling, or burning drug fields (one of the story highlights).

All around, Far Cry 3 is a great, lengthy game with lots of collection and side quest events to keep you well occupied into the 30+ hour range. The game mechanics all work well, and the lush island setting is one of the more beautiful, realistic open-world settings to date. I even found myself running for shelter when the thunder and rain came, wearily checking my six for lurking predators.

I felt the game to be a little bloated, needs more appearances by Vaas, and some of the gameplay collections tasks like unlocking the many radio towers to reveal the map can be a little tiresome. The random animal attacks, and the occasional unfortunate timing of random enemy AI scouting parties are annoying. The bears are just mean, and the vast depths of the ocean are claustrophobic (to me). But otherwise the game has very few faults, and is well worth your consideration, especially if, like me, you were a little turned off from Far Cry 2’s grim, Malaria centered setting and story.

Improper Use (Killing an enemy with the repair tool) – 5G
Say Hi to the Internet (Find the Lost Hollywood star *Christopher Mintz-Plasse a.k.a. McLovin’*) – 10G