In The Crew, I recently reached the West Coast, and I’m starting to get the impression I’m nearing the end of the story mode. Certainly feels like it’s leading up to a climactic showdown. Not that the game is anywhere small, quite the opposite actually, but the story mode itself seems somewhat minimalistic.

Luckily, across the map, all the race types and missions can replayed to earn more money or a better score. And there’s the multiplayer and faction missions as well. Faction missions alone can be anywhere between 10 minutes long, to 4 hours. A couple weeks ago I posted a Twitch timelapse of a 1hr race.

So, obviously there’s a lot of replayability to the game, and I’ll continue to plug through the challenges to acquire the achievements. It’ll be my dedicated racer, I think, for a while. Maybe until Need for Speed comes out.

Badland GoTY has been a lot of fun to play solo and Co-op. I’ve noticed though, that the missions are very similar across the two modes, with a few minor differences for some of the puzzles. So not any variety. But more than enough content.

The game is, by far, the most fun when in co-op, watching the hundreds of flappy monsters explode against the blades and spikes. Especially when the map’s modifiers all come into effect: when you have dozens of clones, smashing through physics objects in slow motion. It even has the slow motion sound effect for added value.

I’m also nearing the end of the campaign in Splinter Cell Blacklist. The game is really showcasing its action sequences near the end, stealth be damned. There’s still the stealth options, but the game gives us 3 options to take on each mission, whichever play style suits us best.

The campaign aside, the side missions also show lots of variations to the gameplay, whether they be straight up stealth & eliminate, or wave based survival missions, the game has a lot of replay options. Also an option is to reply past missions for better score, or completing different gameplay challenges.

Lastly up is Destiny, and The House of Wolves expansion. The story is still very much the same as the campaign, relegated to voice-over, and not even worth listening to. There are some new enemy variants, and some of the missions introduce some new areas and platforming elements. 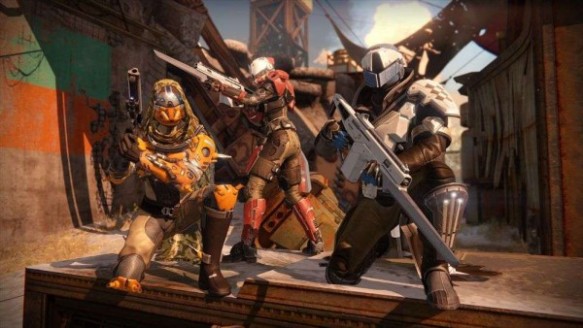 The game also introduced a new social hub, and two new multiplayer modes and a modification to the free roam social events, as they introduce new boss encounters.

The multiplayer modes are the Temple of Osiris, and Prison of Elders. Prison of Elders is the new 3 player Player vs Everything, wave based game mode. 3 waves, 5 rounds, each round mixing up the arena and round specific challenge.

Reviews for all 4 are around the corner as they’re getting wrapped up.

I’m still slowly plugging through Assassin’s Creed IV, and Far Cry 4. I do need to wrap up one of these games, or move on, before I open up Shadow of Mordor. That being said though, Batman Arkham Knight will be in my hands next week, and I might just lose myself completely in that.

I wouldn’t mind playing through Metal gear Solid: Ground Zeroes a few more times before V is released in September – so I might have to dust that off.

Also simmering on the back-burners are Battlefield Hardline, Assassin’s Creed Chronicles, Contrast, and State of Decay, which I COMPLETELY forgot about – I wonder if all my companions are dead? I heard the game runs in a slower real-time mode when it’s not being actively played. As it’s been 2 months.

Last up, almost forgot, Tomb Raider and the Temple of Osiris, I’m currently playing in co-op, on the odd occasion. More impressions of that next week.

Tomorrow I’ll be back with some news about July’s Free Games with Gold and their new model, and hopefully a review for this weekend, plus Achievement of the Week, eee!