After the releases became muddled, with three separate developers working on their own Call of Duty titles, and Activision’s focus on Multiplayer and Zombies took precedent, I started to lose the insatiable drive to pick up the games on release, and resigned myself to get them later on in their life, around the time the next iteration is announced.

So that brings us to 2014’s Call of Duty: Advanced Warfare. The first Call of Duty title to usher in the new console generation, releasing simultaneously on the Xbox 1/360 and Ps3/Ps4. This was Sledgehammer’s first go alone at a Call of Duty game, and the results are pretty impressive, even considering they are working in the three year development cycle now.

Advanced Warfare pushed the series forward into the next-gen visuals, and for the first time since Call of Duty 2, used a game engine that had its majority re-written and built from scratch. The game’s story also pushed the franchise further into a futuristic setting, taking place between 2054 and 2061. Call of Duty Black Ops 2, Treyarch’s first step towards a futuristic game, was set in 2025.

The story follows one playable character, Jack Mitchell – as opposed to previous titles which followed multiple – and makes use of pre-rendered cinematic cutscenes to tell the story in between missions. After a mission in North Korea, and losing his friend in the fight, Jack is offered a position in Atlas Corporation, which is a private military organization. Following a series of terrorist attacks, the world turns to Atlas – who holds no country or government allegiances – to stop them. After a year of fighting, watching as the terrorist groups attacks becoming increasingly sophisticated and deadly, Altas – essentially for-profit mercenaries – has emerged as the dominant military force in the world, showing that they are the key to holding back the terrorist attacks and aiding countries around the world. 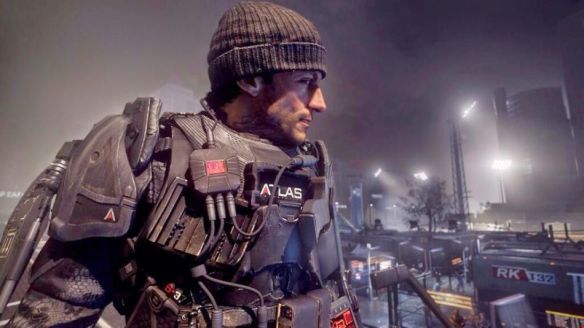 The story jumps forward a couple of years, and we start to find information linking the Atlas leader, Jonathan Irons (voiced and acted by Kevin Spacey) to the ongoing attacks, showing that he has been deliberately allowing the attacks to occur to continue Atlas’s reputation, profit, and power throughout the world. When his devious plan is revealed, Irons takes to the United Nations General Assembly, reveals his plan to remove all politicians, and declares war on the world. And there isn’t a country with a big enough military to stop him.

Coinciding with the futuristic theme in the story, drones, and other futurist technology play a big part in the game, and gameplay mechanics. The player is equipped with an exo-skeleton suit that allows for boosting in different directions, or long falls and a soft landing. It allows for additional strength as well, for melee combat, and moving large objects, like cars; ripping the door off a car and using it as a shield is pretty fun. There are also a few instances where a mute charge is used, when taking part in a breach-and-enter. Everything in the zone of the mute charge is silenced, and is an interesting event to watch unfold. The guns in the game are updated as well, and offer different types of scopes – some of the hybrid type, allowing for different levels of zoom, or thermal views. The player also has unique types of grenades: one type highlights all the enemies in the area, and another is a drone-like grenade, that will propel towards the closest enemy grouping.

Visually and gameplay-wise, I think Advanced Warfare is a positive step for the franchise. I still have to go back and play Black Ops 2 to see how that last-gen game pushed the boundaries. Story-wise, the game didn’t break much new ground, aside from using a famous Hollywood actor – nothing that hasn’t been done before. I do see that as the future of some games, as mo-cap and 3D rendering gets more and more advanced, and the production quality and story telling visuals become parallel with Hollywood movies. We’ve seen it already now with EPIC Games latest announcements towards their Unreal Engine being used to render Animated Movies.

Overall, a great step forward for the franchise as they truly break ground into the latest gen. The new types of combat add a lot to the series, and the technology of the new engine, and consoles allows for bigger, more detailed level design and creative destruction. The exo-suit allows for some verticality to the levels as well, and while somewhat limited during the campaign, Multiplayer allows for full use. The story is also a little more coherent, although it does jump ahead a few years at a time. I thought Ghost was a step forward, but Advanced Warfare just leaps ahead, and is breath a fresh air to a franchise, that was starting to grow a bit stale.

Now to move ahead again, and try me some Call of Duty Black Ops 3… but I promised I would play 2 first.

Notable Achievements:
Never Saw It Coming (Boost jump, dash forward, and then air stomp an enemy) – 10G
Carma  (Kill and enemy by throwing a door at them) – 10G