Over the weekend I started playing through Deus Ex Human Revolution again, to get caught up with the story before I pick up Deus Ex Mankind Divided this week.

I last played the game in 2011, and when I was going through the achievement list, I realized there were quite a few story related ones that I had missed the first time around, so I’m focusing on those this time.

Graphically the game still holds up – the faces are a bit polygonal and the facial animation is a bit off, but that could be choked up to the Xbox 360 emulation on the Xbox One.

I’m also playing through the original, and not the director’s cut. I had heard the DC adds the DLC and changes the boss fights dramatically, but I opted to not purchase the game again, since I’m just running through the story again. I’m also playing through it a bit quicker now; more of a run and gun play through, and less on the stealth side. Pistol and Tazer only though. See how this strategy holds up against the bosses.

Interesting things I’ve notices during this play through:

More impressions as I progress further. I’m hoping to wrap up the game this week and pick up DE: Mankind Divided as soon as possible.

Last week I wrapped up Halo 5, which was a fun play through with ILLESTRADER. I’ll write more about that when I find the time.

I’m also trying to keep up with my drawing as much as possible, which limits my time for writing sadly. Hard to find time for 3 separate hobbies.

I recently completed a drawing of Widowmaker from the game Overwatch. She’s a sniper and I really liked her Noire skin, with the crazy techno dreadlocks. I haven’t played Overwatch. It’s an online only game with limited game modes, but lots of character types. I really like the character designs, so I’m going to make an attempt to draw a few more of the characters before moving on to new subjects.

I wasn’t entirely happy with the final product.  I initially only wanted to do black and white, but because her Noire suit is primarily black, so there wouldn’t be a lot of definition. So I decided to add some colour, but didn’t really want to spend a lot of time colouring and shading. So I stuck with the cross hatch black and white, with flat colours. Quickly dumped in a crappy background as well so the gun wasn’t floating, and voila. 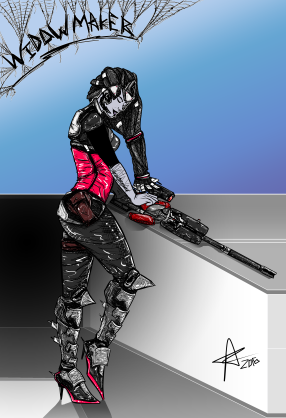 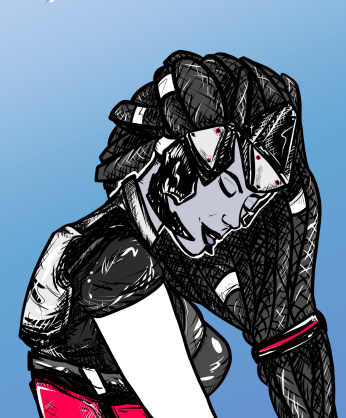 I might go back and actually do a proper colouring job on this one. I know I can do better. And going forward, my goal is to try harder on backgrounds. I usually never do them, and with my comic book aspirations, they’d look pretty weird without backgrounds.

I had fun drawing her name though, with all the spider webs. 😉

You can check out more of my drawings in the arts page.