After deciding to review 12 games before Christmas, I started listing off the games I actually played this year, and then narrowing it down to 12 worth mentioning. Do I start off with a negative review or a positive review? How do I pace these out.

Sooner or later I decided on Batman: Arkham Origins, which actually came out last year, but it’s the freshest game on my mind, as I’ve just wrapped it up. Plus it’s Christmas themed, coincidentally.

You should’ve known trying to kill me was a waste of your time.

Batman Arkham Origin is a unique beast of a game. It’s part of a very successful and well-reviewed Arkham universe but it’s also more of an origin story. Warner Bros has a lot of expectations riding on this title. Warner Bros is the publisher and they handed the reins to their internal team while Rocksteady is hard at work on their next gen Batman sequel. Origin is built off what Rocksteady had already established, and using the engine and gameplay that’s already been perfected.

The story is Christmas Eve, Batman intervenes during a jailbreak led by Black Mask and we learn that Black Mask has hired a group of 8 assassins to compete for a $50 million bounty. That bounty is Batman’s head. Killer Croc is our first assassin, who actually spills the beans.

Continuing along the Black Mask trail, next up is Deathstroke and Electrocutioner.

As we start investigating more into Black Mask, it turns out to be Joker, who has captured Black Mask and assumed his identity and initiated this bounty. We’re introduced to and quickly dispose of Copperhead.

At this point the Joker is getting quite upset with his useless assassins, kills Electrocutioner and disbands the rest. Save for Bane. Knowing Batman will track down Joker in the near future, he decides to wait patiently.

The remaining assassins take it upon themselves to wreak havoc around the city. Firefly trying to blow up the bridge is really the only one of note. Shiva and Deadshot and Anarchy relegated to side missions and quests.

In the finale, we fight Bane. At this point we discover Joker’s devious plan. Bane is wired up to heart monitors, and Joker is sitting in an electric chair. Either we choose to kill Bane, or let him work on us enough that his heart rate monitor activates the electric chair, killing Joker. Will Batman make the sacrifice and kill someone?

The gameplay is identical to the previous games, the Batclaw and Batarang, all the Bat-tools return. The combat is near identical as well, if but a little dumbed down for the counter attacks, and limiting in the animations. I seem to recall the ability to counter gun wielding and shield wielding enemies in awesome ways, in Arkham City.

The grappling hook traversal also seems more constrained this time around, with less attainable buildings and fewer objects to swing to. Otherwise the city is very pretty, less dense, and the Christmas Eve theme is very pleasant, with the music and snowfall.

Technically the game is sound. The city’s vistas are stark and gloomy, in all the way’s Gotham is known for. Batman wears a very similar suit, with some additional padding. His suit does have an origin feel, bulkier, probably more cumbersome. But does it protect us against dogs?

Graphically the game is very good looking, utilizing the Unreal 3 engine to its full potential, on aging hardware. Again, it feels like Rocksteady handed over all the assets from Arkham City and told the team at Warner Bros to just add some polish and snow. Now into their 3rd generation, the Arkham titles have continued to outdo their predecessors. That being said, in my case, I was constantly on the look-out for Riddler (Enigma this time around) packages, and upcoming brawlers, so the majority of the game gets viewed through the detective vision, which is a shame. I am appreciative that certain sequences force you out of the detective view so that the game world can be appreciated.

I did come across a few clipping issues, and holes in the game world. I walked through a door at one point, three-quarters through the campaign. When crossing the threshold, the floor didn’t load and I fell through into the abyss. Normally not a huge issue, but in this case, it also instigated a checkpoint save. Attempting a restart from the last save point would spawn me under the world, only to fall endlessly or float around. Not to be deterred, I continually kept trying to reload the save, restart my Xbox, etcetera, until finally after about 10 minutes of futility, all of a sudden everything worked fine. Crisis averted.

I came upon a 2nd instance as well, in the final battle with Bane. He punched me clear across the room, clipping through the wall and game world, to find myself in the darkness once again. Good thing Batman prefers the night.

Granted, the feat itself was impressive and I applauded Bane, but I feared another checkpoint glitch happening, potentially ruining any chance of actually completing the campaign. Luckily my fears were unwarranted and I was able to continue the fight as normal.

Clipping aside, my only real complaint about the game was the story itself. It had its highs with the relationships between Batman and Alfred, where we see Batman’s eagerness to fix Gotham’s problems, his willingness to sacrifice everything, and Alfred’s hesitation and concerns for Bruce Wayne. He’d plead throughout the night for Bruce to come home, and let the GCPD do its job. Additionally, the conflicting relationship between Gotham’s Dark Knight and Captain James Gordon is unique to the series. It shows Gordon’s fears and lack of trust in this unwanted hero in his city.

The lows were in the whole assassins’ concept. Touted as this one long night where Batman would have 8 master assassins all fighting for a 50 million bounty and the seemingly impossible task of Batman surviving this evening soon becomes a non-issue. Luckily each boss fight in itself was unique, and a blast to play. Nevertheless, what is supposed to be 8 assassins turn out to be 5 during the campaign: Croc, Deathstroke, Copperhead, Firefly, and Bane. Electrocutioner is a non-fight, and the other baddies, Shiva, and Deadshot are relegated to side quests, along with some other additions, in Anarchy, Penguin, and Mad-Hatter. 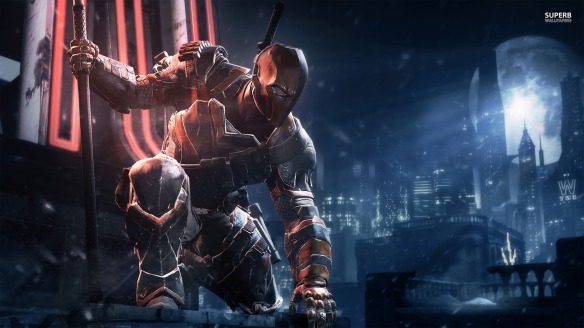 For a lofty concept of 8 assassins vying for one prize, I was hoping for a little more anarchy in the city. More spontaneous clashes! Or even some team work among the assassins or internal conflict. Instead, other than the initial fight with Croc, Batman is actually the one tracking down the assassins. Comparatively, the epic trailer showcasing Batman and Deathstroke’s fight only lead to in-game disappointment when the advertised battle couldn’t match expectation. It was early in the campaign, and wasn’t even multi-tiered.

Overall, the game is a nice addition to the Arkham series, provided that it’s a placeholder while you wait for Rocksteady to complete the trilogy they started. The addition of more investigative case files, and playing Detective Batman was fun, but the disappointing realization that The Joker is, again, instigator of all headaches, was disheartening.

For gamers who like Batman, bats, fluid combat combos, and more Batman.

Also, unmentioned was the multiplayer element. This was intentional. I didn’t try it.

Point Counter-Point (Defeat Deathstroke without failing a single counter) 10G
Thanks, old friend (Hear everything Alfred has to say) 10G