Intended to stick with the short-form reviews for a bit, but after stumbling through padded mishmash that is Darksiders II, I had a few things to fuss about, so this review is a little dense, for consistency sake.

Darksiders II’s story is parallel to the events of the first game. If you’ll recall, in Darksiders I, War, one of the Four Horsemen accidently started the apocalypse early, and dooms all of Earth’s population, and is then brought to justice for his crimes. The sequel sees us playing as his brother, Death, who believes War was tricked into committing his crimes seeks to redeem his brother’s wrongdoings and wishes to fix everything and restore humanity. The story from that part continues along its convoluted way, meeting new characters and foes along the way, as Death futilely attempts to reach his end goal. We slowly learn the entire land is actually being consumed by darkness and Corruption, and the plan of saving our Brother starts to fade, and instead we must save everyone else, and maybe Humanity someday. One day? Who cares? 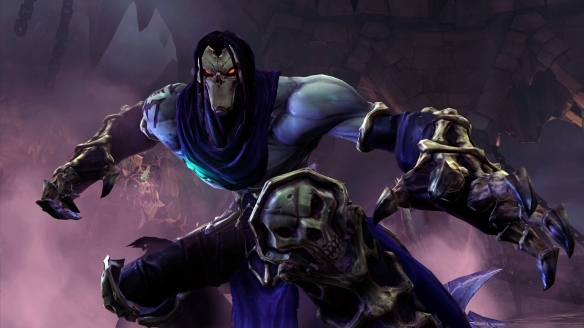 The Darksiders franchise is really just the darkest timeline of Zelda. The story follows our emo protagonist through a steady stream of dungeons, and open lands for exploring; each new area presenting us with a new gameplay mechanic. The dungeons themselves are interactive puzzles, requiring the player to think their way through a series of levers, doors, elevators, and portals, with some wall-running and scaling, all the while fighting a slew of increasingly difficult enemies.

The enemies and dungeons present us with a new RPG and loot mechanic, as the player is bestowed an abundance of weapons, gear, and items along our forays into combat. All the weapons have attributes such as strength, and damage, and resistance, and defense, and stop me if this sounds redundant. You gain experience to level up our character as well, awarding the player new magic attacks.

Traveling the large lands of Darksiders II is made effortless with the addition of our horse, Despair. Additionally, we have the ability to fast travel to the different city hubs we frequent or to return to the dungeons once visited. This is where my first complaints started arising.

We have a horse named Despair (keeping with the #dark theme) to ride around on, in the open vast lands between dungeons, great. But that’s all the horse is good for, just traveling. Once you’ve reached your destination, you can fast travel back as much as you’d like. You can fast travel out of the dungeon half-way through, and return to the exact point you left off from, if you were so inclined. The horse is a nice addition at first, but is really underutilised save for one boss fight. How come there aren’t other speedy enemies that I need the horse to ride alongside? I have 21 inventory slots per style of gear for my character. Including my two weapons, armor and amulets, that’s 147 slots for disposable gear. How come I couldn’t add gear to my horse? I got to the point where I turned on the ‘auto-collect’ for my gear and didn’t even look at comparisons until after I was done the dungeon, and then sold off the rest before starting the next area.

I clocked the main story at 20 hours to completion. 20 hours doesn’t sound like a lot of invested time, and you’d be right, but it certainly felt like a long time. The story and quests are just so thin, but padded for the sake of game time; always collecting items of three to progress. There are some side quests to waste time, and a challenging labyrinth quest that required collectibles to navigate.

I felt the story to be unnecessarily puzzling, and Death’s true goals to be lost along the way as he was sent from one meaningless task to the next before finally defeating the land’s Corruption boss in the end, and making the ultimate decision to save his brother and humanity, and sacrifice his kin. I was disappointed that the game ended in another cliff-hanger, similar to its predecessor, and that I did not get to meet up with War at all. The game’s final moments promise more, but we’ve heard that before.

The art and design is gorgeous. Some of the landscapes were breathtaking, especially in the Land of the Dead: its tormented lands, and scarred earth. And the character, Death, is a design deserving applaud.

The dungeons themselves were very satisfying, just the right amount of puzzle that required thought. The plat-forming and gameplay elements for traversal, like the Death-Grip (grappling hook), were used well, and frequently, with each new area adding another element for navigation. Constant waves of enemies, increasing in difficulty, were a pleasure too. Death with the dual-scythes always felt like a bad-ass.

The bosses were imaginative, and like its blatant inspiration, Zelda, always required that one clever element to assist with defeating them. My one gripe would be the game’s paramount boss featured heavily in the trailers: the boss that seemed ripped out of Shadow of the Colossus. The boss was the only example of an enemy that was large enough that we had to climb on it and attack certain key weak points. My complaints are a) completely under-utilized large-area boss fight which proved to be the only true use of the horse. Obviously would have appreciated a few more instances of this type of battle. And b) this climactic type of battle was easily the ¼ mark of the game’s story. To have this boss featured heavily in the trailers, and expired so soon is wickedness.

The game is sound. Like its predecessor, it has an interesting tale, with some epic fight scenes, relegated to cut-scenes, but I digress. The art, character design, and scenery are marvelous, and dungeon crawling is very satisfying. The game, however, suffers from some excess filler, cushioning the thin story with unfortunate fetch-style quests, and leaves us in the end wanting what we ultimately wanted going in: meeting up with War, as two brothers of the Apocalypse.