What’s another word for amazing, that’s not quite that…? “Expected?” 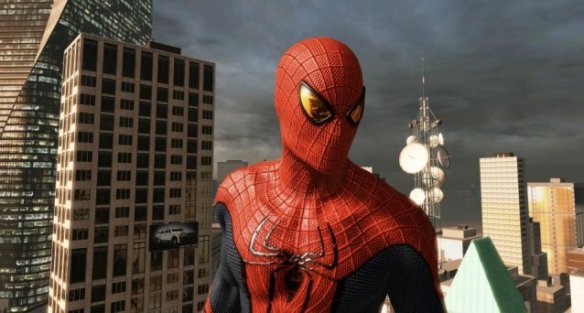 The Amazing Spider-Man game from 2012 was about what I expected; however, there were some pleasant surprises. Spider-Man games in the past have had their qualities and their charm. I guess that’s why they keep getting made, year after year. But how many Spider-Man games can you play before the formula gets old?

A couple years ago Beenox came out with Shattered Dimensions which introduced a new view, incorporating 4 different Spider-Man universes into one game: Amazing Spider-Man, Noir, 2099 and Ultimate Spider-Man.

Bringing with it unique gameplay for each section. They followed it up with a sequel, Edge of Time, keeping the same gameplay, but only keeping the Amazing and 2099 universes. Positive-to-mixed responses…

Scrapping it all, Beenox came out with the movie tie-in: The Amazing Spider-Man. They kept the same design aspects of the previous games for the mission based levels, with a heavier focus on stealth based attacks, but breaking up the story with a full free-roaming, free swinging city, with its own side quests and collection aspects.

The web-swinging is a welcome addition, watching Spider-Man majestically swing through the air, and slingshot himself up buildings, all with the amazing acrobatic animations we’ve seen in previous TV shows, movies and games. The downside is all you need to do is hold one button, and the game does everything for you. You just angle the direction, and the game does the rest. Not that I ever wanted to know what it was like to be Spider-Man, I’ll happily just watch him do his thing…Sigh.

The combat is pretty straight-forward, if not a little spastic. Just mash the “attack” button until prompted for the “dodge” button to avoid attacks. And if you’re running into trouble, just press the “oh shit, get me out of here” button to escape everyone’s attacks and focus entirely. Like all Spider-Man games, the combat and camera movements always seem very chaotic, and a little disorientating at times. Maybe spiders see things differently.

The story continues where the Summer blockbuster left off. With the Lizard in jail, Alistair Smythe takes over Oscorp and starts making robots to help with the cross-species outbreak currently plaguing Manhattan. Everything gets neatly and predictably tied up in the end so as to not ruin the movie sequel’s continuity, the “Peter Parker and Gwen Story” continues and Spider-Man has to enlist the help of Doc Connors, breaking him out of jail, to assist with the outbreak.

Visually the game is standard affair, and just reeks Activision. The city’s transformation through the story is a nice touch, as the outbreak becomes worse. There is a day and night cycle, however it’s not real time, just strictly story based. And some of the boss fight’s action sequences are presented well. The developers took a cue from Rocksteady’s Batman games, and had suit wear-and-tear during the missions for the Spidey suit, but it was mission dependent and does not carry over from section to section. I guess Spidey just needs to continually repair his suit at every intermission, or maybe he has a lot of back-up suits stored as his apartment. However, being a broke super-hero, I highly doubt it.

The game is a step up from the previous two Spider-Man games, but, more limited in scope. A pleasant surprise for a movie tie-in, and I do praise some of the enemy boss choices (Scorpion, Rhino, and Felicia Hardy). That, and the game does have a nice shiny coat of production value, but a tired gameplay formula, repetitive enemy types, QTE Boss Fights, and a disorientating camera shows some cracks in the webbing.